Believe it or not it is one of the biggest problems we face when developing a new site. Every browser behaves slightly differently to every other browser, even when we stick to web standards we inevitably have to tweak something to make it work the same in IE and Firefox for instance.

Theoretically with unlimited time and money we could achieve this. So if the client really wants their site to work perfectly in the NetFront browser (the buil-in browser in the Play Station 3) we can do it… for a price.

So it comes down to “choosing” which browsers to support. Generally we go for a  % of market share, so as of now the percentages look like this:

So if our cut off were 3% then we would only support IE, Firefox & Safari. But things are never simple! It really depends on who your target audience is, let’s say you were building a site for web industry professionals, then your stats would look more like this:

In this sector Chrome would replace Safari at the 3% cut-off. In reality it wouldn’t matter too much as they are both based on the WebKit platform.

IE6 was originally released August 27, 2001 and was superseded by IE7 on October 18, 2006. Interestingly, for a browser that is over 2 years out-of-date it still retains a massive 23% of the overall market as you can see from the graph below: 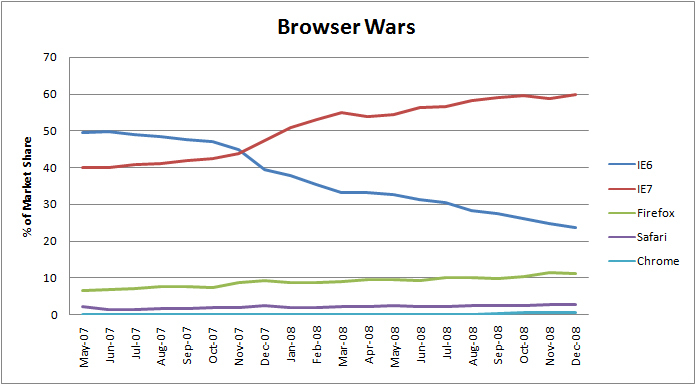 What is interesting here is that although the Firefox numbers are increasing slightly the real gains have been with IE7 – hardly surprising BUT remember the main reason the IE7 take-up has been so slow is due to the fact that Microsoft started checking up on Windows licensing prior to allowing an upgrade!

You might reasonably argue that the only reason that Firefox is on the rise is that it is being installed by those that CAN’T upgrade to IE7 because they don’t have a valid Windows licence!

Either way, IE7 is still massively increasing its market share and IE6 will not be of any importance by the end of 2009, with a projected, market share of less than 5%.

It seems that people have very short memories in web world, despite the fact that all the historical data is freely available.

There is a general feeling (especially among the web-professional community) that Firefox will become the all conquering giant-killer that finally rids us of the IE behemoth. Unfortunately this just isn’t the case, or at least the figures don’t bear it out. On the face of it from the graph below it would seem that Firefox is on the ascent and IE is on the decline: 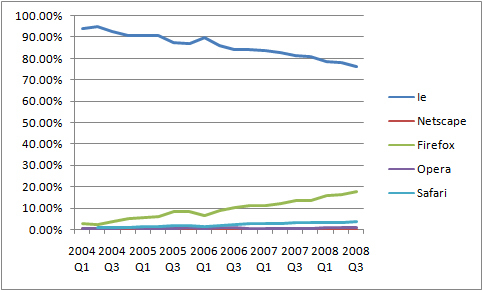 But, if you go back a bit further you will find a little browser caller Netscape! Just 4 years before Firefox it controlled about 20% of the market (which is more than Firefox currently holds) and was the “alternative” browser to IE. As seen here: 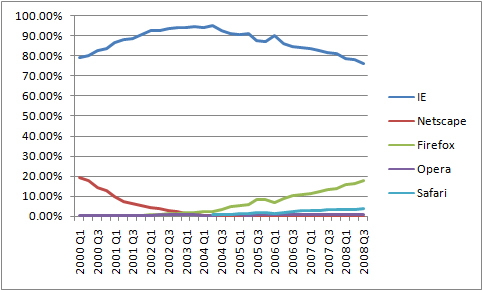 In truth by this time it was really in decline anyway from the heady days of 1997 when it dominated the market (even IE was an also-ran in those days). All that Firefox has really done is pick up the people who just “Don’t want IE” – But could it be the new Netscape? Well maybe, but remember the rise of IE directly parallels the emergence of Microsoft Windows being the dominant operating system and Microsoft’s determination to make sure every copy of Windows ships with its own (MS) browser “built in”.

What About Web Standards.

Until someone can “impose” web standards there will always be a margin of difference. Admittedly with the advent of Gecko & WebKit (the foundations of browsers such as Firefox and Chrome) things have got much better but even so variations of how a standard is applied still exist. This has a massive knock-on effect for both web design and accessibility. The myriad of supported and unsupported accessibility features across the browsers are baffling! For a look at just how baffling see this browser comparison article on Wikipedia:

If only it could be like TV – hundreds of channels, produced by tens of thousands of production companies, with millions of different programs… and guess what? They all look the same on my TV, your TV, a Sony TV, a Panasonic TV, an LCD TV or a Plasma TV.

In some ways what we have now reminds me of how the early railways used to be, with each railway company choosing their own standards. This prevented trains from one company being used on another’s tracks.

Eventually with both TV and Railways it was commercial forces that remedied the issue of standards. Maybe one day browsers will go the same way and have standards that everyone sticks to.

The Future – In Summary.

So for now we continue to try and please everyone and look forward to the day it all just “works” – or failing that just until the day we don’t need to support IE6 anyway!